Mermaids Tavern is owned by Betty and Venus as partners. Venus bought it from Earl, the previous owner of the establishment, when it was still known as Breaker's.

Earl and Betty lived and worked in Breaker's tavern. Earl also had an office in the building. It was there he kept the brithrights of Betty and Venus, hidden inside a lamp. Breaker's functioned as a food joint and a bar. It also featured a mermaid show, featuring Venus.

Later when Venus bought the place and partnered up with Betty, they turned the place into a seafood restaurant, and renamed it Mermaids Tavern. 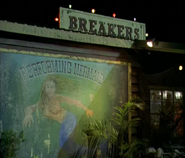